• Clean your roof using a safe, low-pressure process
• Get rid of all moss and lichen from your roof
• Remove discoloration—black streaks, etc.—from your roof
• Restores your old or new roof to its best possible condition No Hassle, No Obligation Estimates. 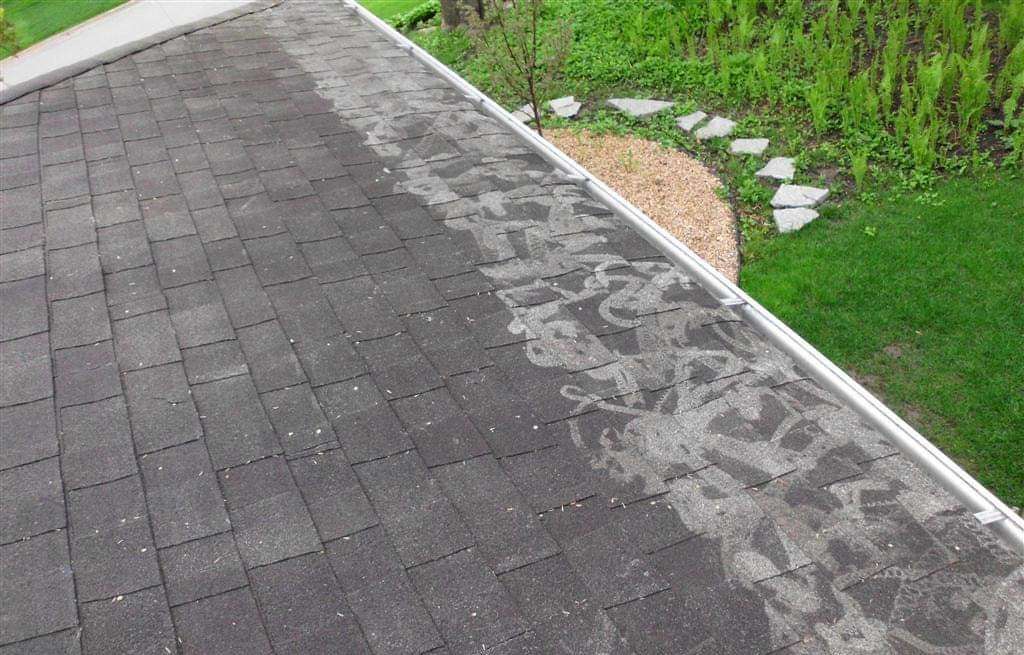 Don’t let this happen to you!

Improperly or Never Cleaning Your Roof May Cost You Your Warranty.

We use less pressure than your garden hose to protect the granules on your roof! No degreasers or tsp should every be used, we follow strict formulas for the correct detergent ratios.

The photo above is not our work, this is an example of what high pressure can do to your roof. This damage is permanent, but can be avoided by hiring Southern Solution

What types of roofs do we clean?

We know how to clean house!

Not Satisfied? We'll Fix It Or You Won't Pay!

We Clean and Restore...

Are We The Best Roof Cleaning Company For You?

We provide a safe and (insured) trained service for cleaning your roof based on the manufacturer’s guidelines.

Storms response to initial questions about the service he offered was immediate! He arrived on time as promised,and the price and quality of cleaning went above and beyond expectations. Definitely recommended and will use his service again. This is an honorable man I highly recommend.

Southern Solutions did a great job cleaning moss off my roof, which was damaging it. The price was reasonable and the work was done very professionally. The owner clearly takes pride in his work. I also got a price for driveway cleaning, which I will do in a few months. The price was better than the price I have received from other people and I like the cleaning process Southern Solution uses rather than the regular pressure washing most companies seem to do.

The guys at Southern Solution did a wonderful job on my mother in laws home. They were very courteous and helpful and took the time to fit us into their already busy schedule so we could surprise her when she returned from her trip. The house looks clean and shiny again and she is so happy. Thank you so much!

Professional and prompt. Service was excellent!

We are so pleased with our vinyl siding it’s bright white again! Such a Great job on gutters and siding, my husband Barry thinks it was Excellent work. 5 stars, would give 10! Thank you, Storm

No Hassle, No Obligation Estimates.

Roof Cleaning Is The Highest Value Adding Service For Your Homes Exterior!

Roofs typically start showing growth after about 5-10 years,but lack of sun, foliage, and clogged gutters can cause moisture to retain on your roof, and start the roof eating growth faster.

How Do You Remove Moss From A Shingle Roof?

Moss will root into your shingles and may push up on the edges causing a potential for leaks. Our treatment will immediately kill the moss, but it will take a few sunny and rainy day cycles to remove the moss roots and allow it all to fall off without damage.

The moss can not immediately be removed without the potential for damage.

The growth after being treated typically releases within 1-2 months. Our method will keep the granules intact that protect your roof!

How Much Does It Cost To Have My Roof Cleaned?

Our Roof cleaning prices start at $175 for a basic small roof with a few streaks and varies from there depending on sq footage, difficulty, pitch, landscaping, and a few other factors. Our prices typically fall within .20-.40 cents per sq. ft. in most cases.

We guarantee spot-free roofs for 3 years after cleaning and will retreat at no cost if needed. Roof Cleaning when completed at the same time as a house wash or gutter cleaning could push this price even lower than .20 per sq. ft.

Our average roof cleaning price is about $600 for a complete roof on a medium-sized home. This cost is on average 20x less than replacing your roof!

If the growth on your roof is left untreated the growth holds moisture within shingles, causing premature aging and rotting. All of which can lead to leaks and even needing a whole new roof which costs thousands of $$$$$$.

Lichen On your Roof?

Roofs are often damaged by lichen, which becomes an extremely hardy pest and is very difficult to remove. If you have lichen on your roof, its time to have it cleaned!

If you peel lichen off your roof, it will leave a scar or divot. Lichen has fused to the granules on your shingles and peeling it off also takes the granules off, even if it is dead. Roof washing will kill lichen immediately. However, the dead lichen will remain behind for a number of wet and dry cycles before falling off.

Roof washing will not repair the divots left behind from the lichen peeling the granules away, but it will prevent any further damage from happening. You may have moss growing on your roof without knowing. We see it often hidden under dormers or lightly growing between the cracks in the shingles.

Roof washing is a great way to get rid of moss and clean your shingles. It usually puts an end to any potential problems with roots growing under them, too!

After roof washing the moss dies and becomes bright white in color, outlining the shingles it was growing under. Once the moss is killed, so are the roots.

Remember, it is much better to have the growth killed and eventually the clumps fall off the roof than to have someone up on your roof with a power washer or scrub brushes loosening the granules of the shingles.

Improper cleaning may be more abusive to the roof than the growth. 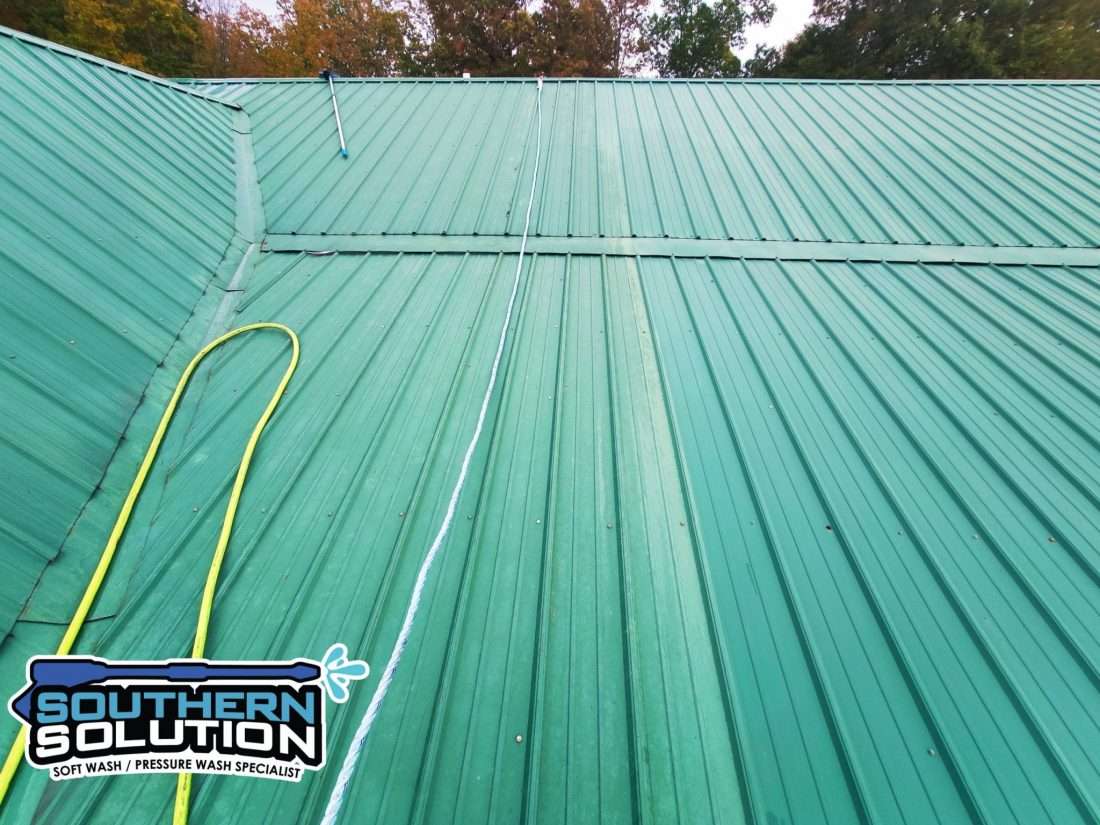 To avoid leaks, you should be very careful when using high pressure or harsh chemicals or metal roofs.

The chance of damaging rubber grommets and causing water damage is high due to their deteriorated condition from too much pressure scaling them away over time or blowing off in strong winds.

In order for your home’s roof structure integrity to remain intact throughout all elements- including weather conditions such as rainstorms – it’s vital that only appropriate pressure and the soft wash method are used to clean your metal roof.